On 23rd May 2019, Amnesty International projected their ‘Now for Northern Ireland’ slogan onto buildings in Belfast, Dublin, Glasgow, and London in celebration of the Irish vote to repeal the Eighth Amendment one year ago.

The purpose of their latest publicity stunt was to pressurise Westminster into enacting direct rule on Northern Ireland by repealing our laws that protect and value children who are not yet born. Indeed, Amnesty’s campaign manager for Northern Ireland, Grainne Teggart, stated, ‘The UK Government must act now to end the harm and hurt caused by our inhumane and discriminatory near-total abortion ban [emphasis added].’1 Given that abortion is a devolved issue, however, such an act by Westminster would be to ignore the devolution settlement.

Amnesty claim that Westminster are entitled to enact direct rule on Northern Ireland because, ‘The UK Government has responsibility to ensure the human rights of all UK citizens, including those in Northern Ireland, are upheld’.4 However, in his Women and Equalities Committee report, Mr. Eddie Hughes MP writes that, ‘Aside from the fact that observation of human rights matters is a devolved competency, there is currently no legal imperative for the Northern Ireland Assembly to change the law on abortion arising from current jurisprudence [emphasis added]’.5 For the judgment of the Supreme Court in the Northern Ireland Human Rights Committee (NIHRC) case in June 2018 was entirely non-binding. (You may read the complete report here.)

Life did it first. 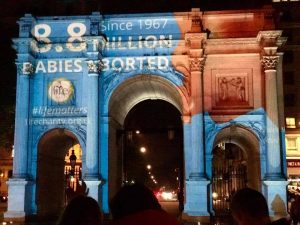 One person is talking about Amnesty International Celebrate Abortion