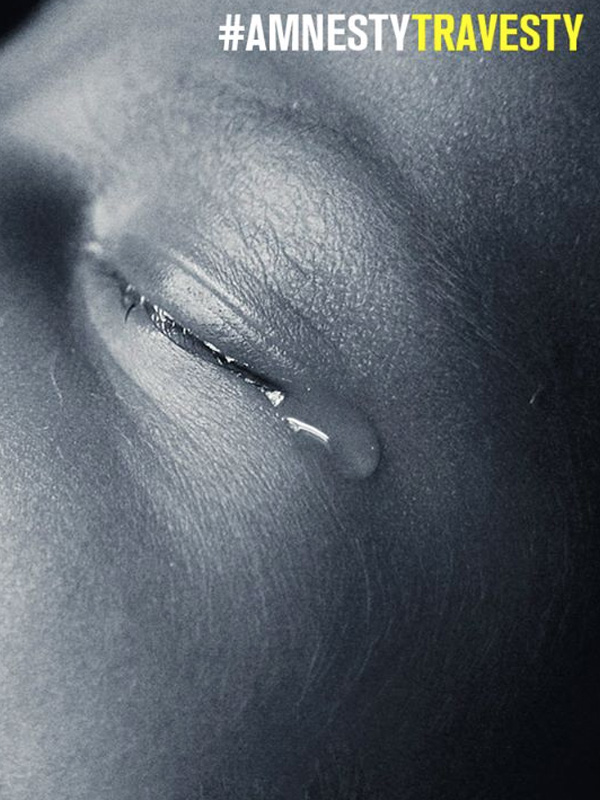 This week, we have seen that Amnesty International (AI) has ignored the fact of the humanity of the unborn child, and their right to life as human beings. Instead, they have chosen to campaign for the decriminalisation of abortion based on a false understanding of how abortion relates to maternal health and life, and following the international abortion lobby’s abusive exploitation of the tragic or difficult cases of individual women to achieve their inhumane ends. Perhaps the most egregious example of their inhumane efforts however, is where they have most recently and particularly tried to end protections for unborn children in Ireland.

In a recent amplification of their ‘My Body, My Choice’ campaign, which includes a focus on abortion, AI’s Ireland branch launched a propaganda video for the repeal of the Eighth Amendment of the Irish Constitution, which protects the right to life of unborn children. To a black-and-white backdrop of a ruined rural church and graveyard, and with the voiceover of actor Liam Neeson, the video claims that Ireland is ‘haunted’ by a ‘ghost of its past’. This ‘ghost’, they allege, lies in a law “written for a different time” which brings “death and suffering” to Irish women.

Accompanying this as if in illustration, Amnesty Ireland put another video online featuring celebrity comedian Graham Linehan (the writer of the popular cult TV show, ‘Father Ted’) and his wife, in which they give their account of how they conceived a child with anencephaly (where the child has developed without a brain, and would not survive after childbirth). This prompted them to have an abortion in the UK, where they live. The fact that this would not have been an option in Ireland is something they find abhorrent, and so they have talked about their tragic case in order to put moral pressure on Ireland to repeal the Eighth Amendment.

The Linehans’ tragic and difficult situation is, of course, an especially hard case. One can only imagine how genuinely harrowing it would be to go through a pregnancy only to have your child die when born. Yet the emotional trauma of such rare cases, similar to that of miscarriage or stillbirth, does not change the fact that the unborn are human beings with inherent dignity who are worth of protection. To allow the killing of one human being because it serves the emotional interests of another, would be to render the absolute principle of the right to life of innocent human beings something so contingent as to be practically useless.

Only if certain rights are inviolable can they work to protect all vulnerable people, and only if we gloss over that fact can we allow our emotions in sympathising with the Linehans – as any decent person would – to overcome what our reason tells us about the necessity of integrity in applying rights protections. Yet surely Amnesty agree with on this point, for their appeal to the Linehans’ case contradicts their official position of wanting abortion decriminalised only for hard cases. What relevance would the sad situation of Graham Linehan and his wife have to their aims if all they were asking for were the availability of abortion for conception after rape, and a threat to the mother’s health and life?

To what else, then, could Amnesty Ireland be referring when it mentions the “death and suffering” of women? It could well be the case of Dr. Savita Halappanavar, which as we saw was cynically exploited by the Irish abortion lobby in such a way as to make a travesty of the facts of her condition. It could also be the purported need for legal abortion to meet the healthcare needs of women, which as we noted is based on a series of misunderstandings of maternal-fetal ‘vital conflicts’ and how problems like ectopic pregnancy can be treated in a system that affirms the rights of the unborn.

More generally, however, the appeal to the “death and suffering of women” in abortion advocacy applies to the consequence of illegal abortion. As Amnesty claimed when they changed their policy in 2007:

“The lack of safe, legal abortion services is recognized as one of the leading causes of preventable maternal death worldwide. The Millennium Development Goals include a goal aimed at the reduction of maternal mortality as key to the eradication of extreme poverty. According to the Millennium Project, over half a million women die every year due to pregnancy related reasons. Some 70,000 of those deaths are attributable to unsafe abortions. The human rights treaty bodies have repeatedly addressed unsafe abortion as a right to life concern”.

This argument is one of the most hackneyed and false in the abortion lobby’s arsenal. For one thing, studies have confirmed that prohibiting abortion does not lead to an increase in maternal mortality rates (the statistical means by which deaths from illegal abortions are measured). A 2012 study undertaken on behalf of the Chilean Maternal Mortality Research Initiative (CMMRI), Women’s Education Level, Maternal Health Facilities, Abortion Legislation and Maternal Deaths: A Natural Experiment in Chile from 1957 to 2007, analysed 50 years of maternal mortality data (1957-2007) from Chile’s National Institute of Statistics, and found that since Chile enacted a law protecting the right to life of unborn children in 1989, the maternal mortality rate had dropped by 70%. This was a continuance of a decline in the overall Maternal Mortality Ratio (MMR) in Chile of 93.8% between 1957 and 2007. The study found that maternal education and quality of health care affected a decline in maternal mortality, not abortion availability.

The same is true within states as well as between them. An American study published in the Journal of Public Health Policy in 2012, which conducted in 23 states by researchers from Stanford University, showed that less permissive legislation was associated to lower rates of complications due to abortion. Meanwhile, a study published in the British Medical Journal earlier this year comparing the maternal mortality of 18 Mexican states with less permissive abortion legislation and 14 states with a more permissive law, found that between 2002-2011 those with the more restrictive law typically had lower maternal mortalities than those that had fewer protections for unborn children.

The converse of all this is that making abortion legal does not necessarily reduce maternal mortality, as a WHO editorialmade clear last year when it admitted that “illegal abortion is not synonymous with unsafe abortion”, conceding that its historical measure of ‘safe’ abortion – legality – simply was not sound. What actually makes a difference, as the studies above also demonstrate, are the quality of general maternal healthcare and emergency obstetric care, as well as basic qualities such as female education and literacy, clean water and sanitation, and lower levels of domestic violence.

What is the relevance of all this to Amnesty’s Irish campaign? Simply that what we learn from the world more largely applies very particularly to Ireland. Studies have repeatedly shown that when we compare the over more than 40 years of legal elective abortion in the UK to relatively abortion-free Ireland and Northern Ireland, both Irish jurisdictions show more favourable data on maternal and neonatal health than the British. Whilst there have been some reports suggesting that Irish rates approach British levels, this has not been attributed to botched illegal abortions, but mostly to pre-existent conditions in the women, or ‘coincidental causes’. Other studies have suggested that this is due to increasing Caesarean section rates in Ireland.

Regardless, what we can certainly say is that, contrary to what Amnesty have suggested, there is not a shred of serious evidence that Ireland’s constitutional protection of unborn children brings ‘death’ to Irish women. International and Irish evidence points to countries that have laws safeguarding babies in the womb from being destroyed in abortion have better maternal mortality rates, and those mortalities that exist are better dealt with by improved medical care for mother and child, education, and basic sanitary conditions. Not abortion.

We see then, that these arguments fail to justify even the decriminalisation aims of Amnesty. Yet this does not seem to be their ultimate argument. Their campaign to repeal the Irish Eighth Amendment is called ‘My Body, My Rights’, a phrase that communicates precisely the idea of a ‘right to abortion’ they claim not to assert, rather than a mere insistence on allowing abortions in extreme situations.

This is the ultimate Amnesty Travesty: their ostensible moderation for only wanting abortion under certain very rare circumstances seems to be a fig-leaf for the fact that they have given themselves over to a pro-abortion agenda that entirely contradicts their basic human rights philosophy. Until Amnesty turns back to the ethic of human dignity that should form the basis for their entire moral enterprise, recognise the humanity and right to life of unborn children, and advocate instead for the humane alternatives to abortion that truly safeguard the health and life women and their babies, it will have failed to truly fulfil its mission to ‘protect the human’.