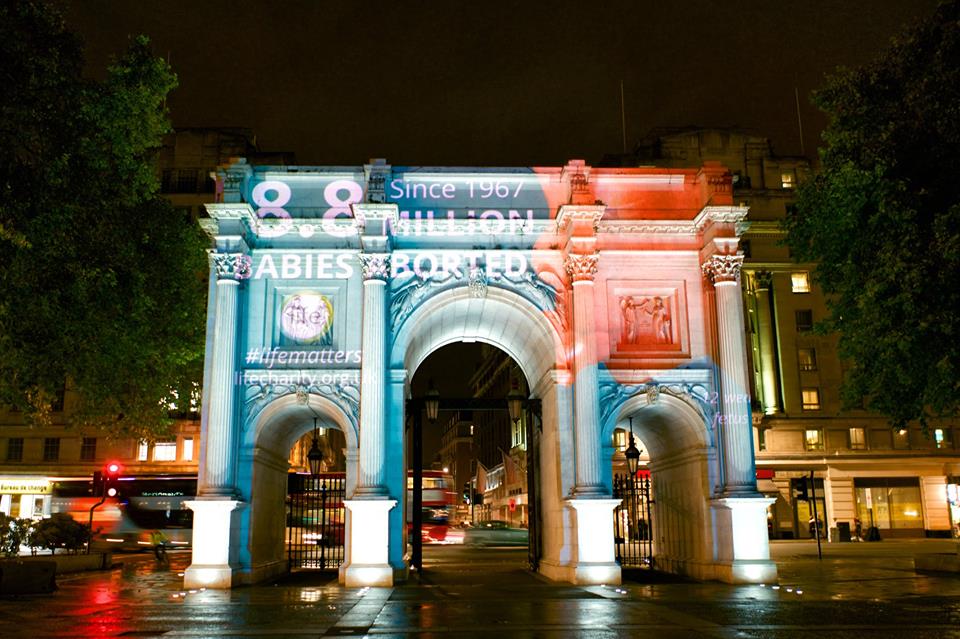 In 1965 when Lennart Nilsson published A Child is Born charting pre-natal life from fertilisation to birth, so popular and well-received were the images that the book sold eight million copies in four days. The pictures were so popular they were sent into space on the Voyager 1 and Voyager 2 probes, as part of a possible interstellar message to other life forms.  Today those pictures are as sensational and as breathtaking as they were in the 1960s. And for good reason; they show the awe and wonder of human development in great and wonderful detail. Follow on decades later and we have ultrasound and fetal models all showcasing the baby’s development in utero.  So when did these visual representations of the pre-born child become a source of societal objection? At what point did we as a society decide that seeing what the baby looks like in the womb would be deeply traumatic to women?

I am referring to the actions of Lambeth Council which dismantled our Life charity stall on Sunday morning at the Lambeth Country Show and ordered us to leave without official explanation except for some social media posts from one councillor suggesting our fetal models would cause upset to women who had abortions. So yes the question does arise, when did our society decide that visual representations of the baby in the womb are a source of trauma and should be hidden from the public eye?

The truth is that society hasn’t decided any such thing. Enter the bully brigade, the omniscient and self-righteous arbiters of society who know what women want to see and who use whatever power they can wield to ensure women only see what the brigade thinks is good for them to see. These are the men and women who in positions of power and in this age of liberalism and equality, have decided that women are in need of protection and that this crucial job falls to them, the guardians of society. Thus they bully into submission anyone who opposes their methods of “protection”. Women must be protected from people holding rosaries and praying for them and their unborn child, so they ban prayers in front of abortion clinics. Young women must be protected from hearing about pregnancy and the baby inside the womb, so they ban or restrict the prolife voice at universities.  The general public must be protected from these traumatic pictures of the unborn baby, so they try to ban advertising of Life’s support services on buses. And now they target the public family fairs where people have a right to see how their family began. Many children and their parents visited Life stalls to gaze in awe and marvel at how the baby looks at various times in the womb. But wait, that should not be tolerated in bully brigade society.

We get it. We understand. It is no coincidence that when people speak of buffer zones in local councils like Lambeth and Ealing, the same lobbies are being done on Isle of Man and in North America.  No longer is the abortion industry content to quietly bend, twist and abuse the laws to maximise their income with the hope that no one notices. They are now pulling out all the stops to ensure their business worth over £118 million (2011 figure) a year not only survives but thrives. Their influence today is exerted right where it matters, with the key decision makers. The lobby for abortion on demand in Parliament is strong, persistent and vociferous. Week after week they pressure the Government to legalise abortions at home. Local government councils which ban demonstrators outside clinics do a great service for those clinics. Every woman who opts for support instead of abortion, having met someone outside the clinic, denies the abortion clinic crucial cash.

So we know why we have to be made to shut up and let the abortion status quo continue. We know why we are shouted down and aggressively kicked out of fairs. We know and we understand their tactics of intimidation. We want them to know that we know. Today what we see is the institutional bullying of the prolife movement because it dares to stand up for the unborn baby and because it dares to provide an alternative to women. We dare to hurt the cash flow of the powerful abortion industry. My mother used to tell me that a bully is a coward. You have to stand up to them. At the time of writing this blog today, Friday 27 July, we are yet to receive an official explanation from Lambeth about its actions on Sunday. We are waiting for when they finally crawl out with an explanation. Make no mistake: Life will stand up to every act of intimidation against us. We do not pretend to be something we are not.  We aim to show women the truth, to celebrate that truth and where necessary, in a gentle and compassionate way, to support them in dealing with the truth. We have a job to do in supporting women and speaking for their unborn children and we say to the bully brigade, we have done this for 48 years and whatever your tactics of intimidation are, we are not leaving.

4 people are talking about Rule of the Bully Brigade