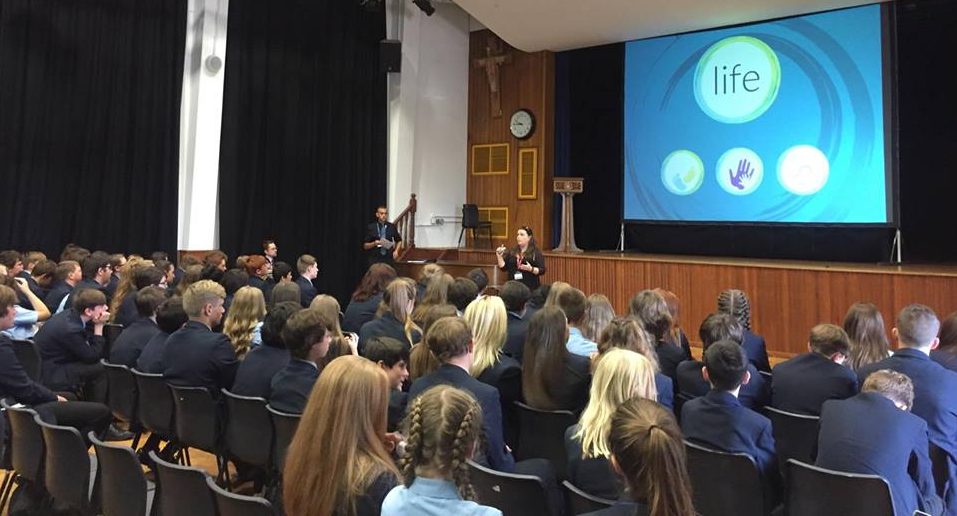 “What did you want to be when you left school?”  A question I was often asked during my twenty years as a Chaplain in an all boys’ Catholic High School in Liverpool.  I often used to retort with, “I don’t know, I haven’t left school yet!”  Two weeks ago, however, I felt like I was starting my first day at school – having finally left to come to work as a Life Matters Officer for Life!  Those nerves were very quickly alleviated though by the wonderful welcome I received from Elizabeth Parsons and Helen Fox in the Liverpool office, and later that morning from the rest of the team during our weekly media call.

The decision to move to work for Life was an easy and obvious one for me.  The work of a Life Matters Officer encompasses so many key areas of working with and for people and sharing a message that is so often either unheard or simply not given the platform to be listened to.  My first experience in a school was listening to Liz deliver the Life Before Birth presentation and all I can say is, wow!  I have a son (he is seven now) and yet, despite having been pregnant for nine months, I still learned so much.  Equally, to see the look of wonder on the faces of the Year 7 students Liz was talking to made it even more impactive.  Then came their questions, and once again, wow!  A thirst for knowledge, an eagerness to want to know more and share their stories.  I could see their genuinely mesmerised faces as more facts and information were delivered in a way that spoke to them so clearly.

Two days later, another school and this time watching and listening to Year 11 students as they engaged in a presentation about abortion and the pro-life stance.  Hard hitting facts that still blow your mind when you think about them for any length of time – none more so than the statistics about the increasing number of abortions that take place year on year.  Add into that the changes now taking place in Northern Ireland, it can look like a very bleak picture. Yet, the amazing encouragement of those personal stories of women who have chosen to seek support and have their babies.  The information about the outstanding work and help that the charity Life offers to those facing an unplanned pregnancy.  The issues surrounding adoption, children born with disabilities and the legal rights – or lack thereof – for the father of an unborn baby.  All of these were delivered with sensitivity and received with open minds that young people are very often criticised for not always having.  It was like watching lightbulbs switching on, one by one, in a room full of potential parents of the future.  A completely humbling experience but one that will remain with me for many years to come.

I have said to my colleagues a number of times over the last two weeks that the impact the work of Life has is so enormous, and yet we won’t necessarily witness that impact long term.  However, what a privilege to walk on this journey with those many young people.  To share a life changing message of hope and joy – that life is such a precious thing and that everyone deserves the right to live a fulfilled and happy life.   That no woman should ever have to feel that she has to choose between having her baby and having her future.  That the support available through the work of Life is literally life-changing.

Last week a different experience again as I took part in a conference at a school for four days.  Leading activities with Year 8 students and helping them to explore the theme of friendship and the qualities we both look for and need to share with others.  Being able to work with Year 9 students who were examining the theme of relationships and reminding them just how important they are.  It has been such a privilege to share that message of how unique and special life is and how much it should be treasured and cared for at every stage.  It has also been eye opening to be part of the moments of discovery and heartfelt honesty that students were empowered to voice.

Two weeks ago I began my own journey of discovery about the work of Life, knowing how important I thought it was.  Now two weeks later I know how important it is but also the mountain that there is to climb.  However, the colleagues, the young people, the work of the charity across the country means that the mountain is not only scalable but the view from the top is awesome!

3 people are talking about Living Life