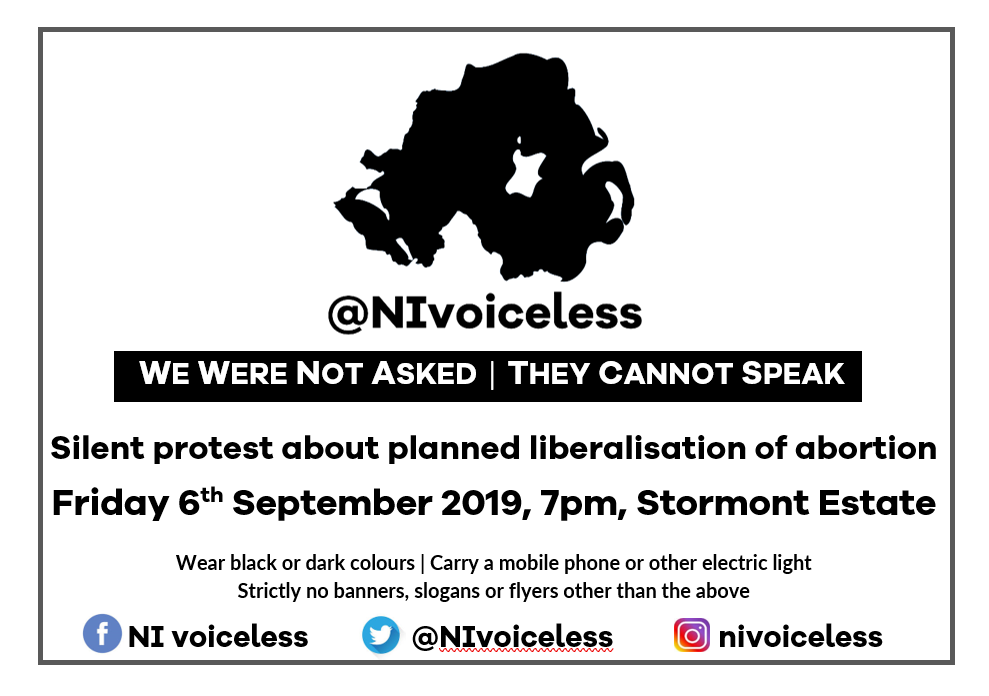 The following information is quoted from the NI Voiceless Website found here:

On 10 July 2019, the Westminster parliament voted in favour of an amendment to the Northern Ireland Executive Formation Bill that would liberalise abortion legislation in Northern Ireland. The bill, including this amendment, will take effect after 21 October if the Stormont executive is not reinstated by then.

This silent protest at the vote and its repercussions says:

a) We were not asked. Westminster has legislated for us without hearing us. Every sitting Northern Ireland MP voted against these changes, the people of Northern Ireland were not consulted, and there is no public support in Northern Ireland for the kind of wholesale legalisation of abortion that has been planned.

b) They cannot speak. Westminster has ignored the unborn child. The human individuals whose lives will be ended if abortion is legalised have no voice in the debate and many speeches in parliament concerning this amendment dehumanised the unborn child and disregarded its value and right to life.

People of all ages and all religions and political persuasions are welcome – anyone who objects to this planned change to the law. We need as many people as possible to express their concerns in silent dignity.

This protest is not affiliated with any religious or political organisation and is not coordinated by any organisation or campaign group. It has been planned by concerned citizens of Northern  Ireland who wish to express our deep dissatisfaction with this intended change in a law we consider to be good.

Gather at the lower gates of Stormont Estate for 7pm. At the blow of a whistle we will walk silently and slowly to the foot of the steps to Parliament Buildings where we will stand in silence, heads bowed and lights held high, for six minutes (one for each county) until another whistle is blown.’

Please show your support by liking and following NI Voiceless on Facebook and other social media platforms. Thank you.