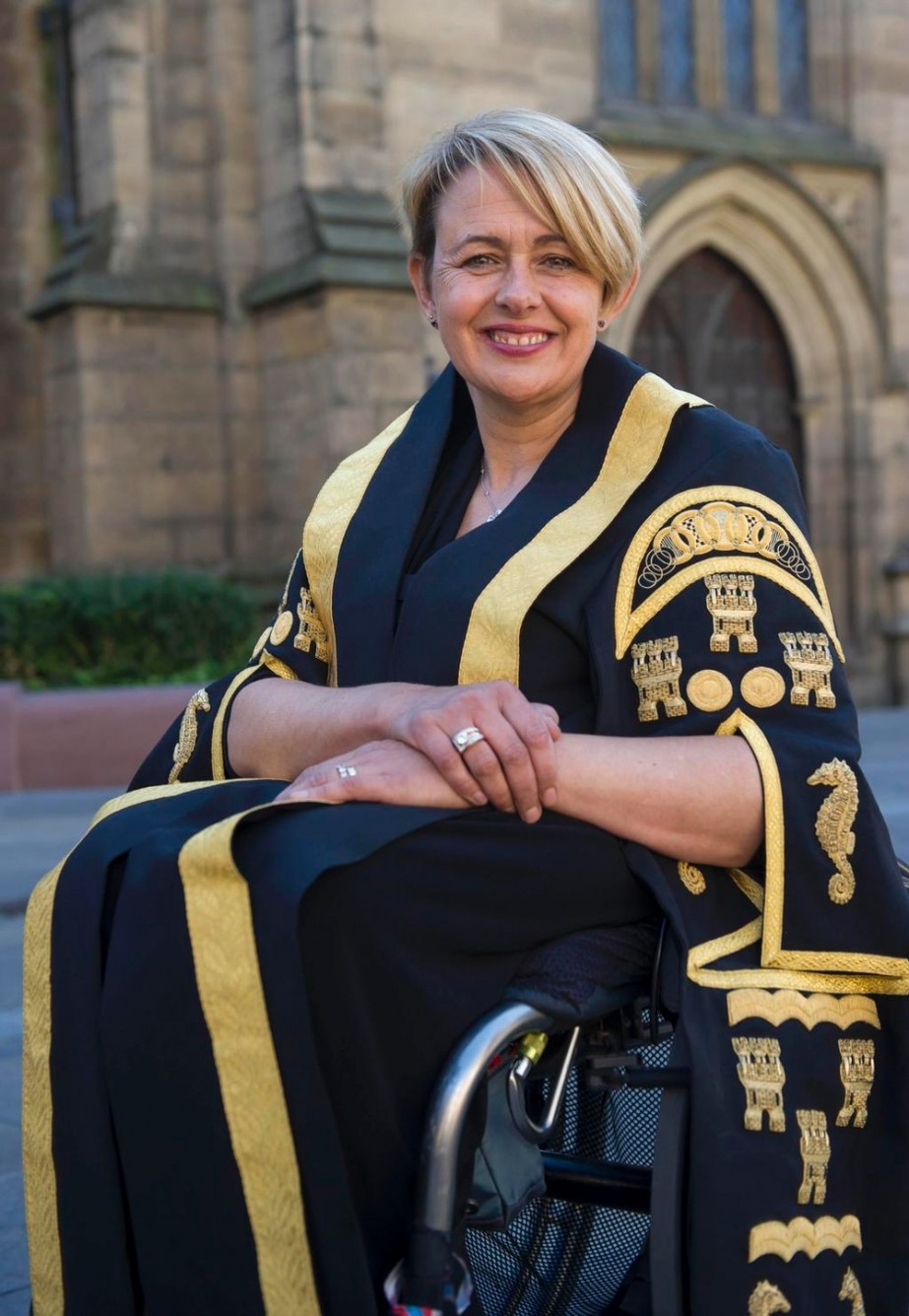 This week the Isle of Man had a question posed to their parliament asking whether they should discuss Assisted Dying Legislation.    This week has been focused on Euthanasia and Assisted Dying. As a response to the Isle of Man question, I was privileged to be able to attend a meeting at Tynwald where Members of the House of Keys would be given the chance to hear from 2 expert speakers on the subject; David Randall (a Doctor of Renal Medicine at the Royal London Hospital) and Baroness Tani Grey-Thompson who as a paralympian and wheel chair user has a unique perspective on this issue. She has been a strong voice against legalising Assisted Dying and Euthanasia and we are very grateful that she has allowed us to share her speech with you.

I am grateful and honoured to have been invited to speak to members of the House of Keys today, especially on a subject which I and many other disabled people, feel so passionately about.  Apologies for not being there is person – EU withdrawal bill this week. I am a Paralympian, wife, mother and I have been a member of the House of Lords since 2010.

As you might already know I was born with Spina Bifida and am a wheelchair user. Like most people, I love my life and all that it has to offer. Despite this, I have found that individuals and society make endless assumptions about my quality of life and my desire to live it.When I was born the first thing my parents were told was “I’m sorry but…..’ negative language that is constantly associated with disabled people. When, I was pregnant I was told that people like me shouldn’t be allowed to have children and I was offered a termination at my pregnancy dating scan. A woman stopped me on the street and asked me how I got pregnant. Her response was “That’s disgusting,”

On an almost weekly basis, I come face to face with low level prejudice and discrimination, due to endless assumptions about my quality of life. I have been told I shouldn’t be allowed out on my own and without my carer, despite the fact I do not need or want one. When my daughter, Carys was only six years old, someone asked her ‘isn’t it hard caring for your Mum?’ She is now 17 and this has been a constant line of inquiry for Carys, ever since.

I am sad to say that on a regular basis, someone asks me how often I have considered suicide because of my condition. One of these occasions recently occurred in the Central Lobby of the Houses of Parliament. This is not said to evoke your pity but to illuminate that the challenges I face as a disabled person, has nothing to do with my physical health but rather, the negative attitudes I encounter daily.

I am deeply concerned that the introduction of assisted suicide and euthanasia-euphemistically termed ‘assisted dying’-will only feed this culture of ignorance, prejudice and discrimination, with deadly consequences. The motion placed before you doesn’t make it clear if you are being asked to consider introducing physician assisted suicide for the terminally-ill or doctor-administered euthanasia for a variety of conditions and illnesses. No doubt both scenarios will be raised during the debate and so I will focus my comments on Canada which permits both assisted suicide and euthanasia and the US state of Oregon, which allows assisted suicide for the terminally-ill only.  Other jurisdictions who have brought it in, have over time lowered the bar

I am aware that ‘assisted dying’ has recently been legalised in Western Australia and Victoria but we don’t know yet how events will unfold there. The experience of other jurisdictions which have licensed assisted dying frightens me.
The campaign group, Dignity in Dying insists that Oregon’s model of ‘assisted dying’ is innocuous and poses no threat to the vulnerable but the data which has emerged from the region is worrying. Oregon allows physician assisted suicide for the terminally-ill with six months or less to live. Although campaigners state that the law has not changed since its inception, as of January this year, certain patients need not wait fifteen days between their first and second request for assisted death. To put it another way, the important safeguard of a cooling off period for patients applying for assisted death, has been weakened.

There are other troubling signs from Oregon including evidence which suggests that those suffering with depression are not adequately protected under the Death with Dignity Act; that the practice of doctor shopping is clearly taking place which compromises patient safety and that applicants for assisted suicide rank ‘fear of being a burden’ significantly higher than fear of inadequate pain control. The US state of Washington has an almost identical law to Oregon’s and reports the same trend that applicants are driven by internal coercion.

The debate about coercion and assisted dying highlights the complexities of human nature and human relationships. The risk of coercion is not purely about pressure from greedy relatives but about the sort of coercion which comes from ourselves to do the seemingly selfless thing by our friends and family. Placed in the context of an ageing population, an over-stretched NHS and the eye watering cost of care, I worry that the right to die will become a duty to die, as demonstrated by Oregon’s experience.

Turning to Canada briefly then, in December last year, the euthansia of a disabled and depressed man named Alan Nichols from British Columbia was reported across Canada, causing devastation to his loved ones and shock among disability rights organisations. Following Alan’s death, a spokeswoman for The Canadian Association for Community Living (CACL), said: “Alan was living in poverty, lacked access to the disability supports needed to live without stress, and does not appear to have been connected to appropriate community-based mental health services.” So much more could have been done to improve Alan’s quality of life but he was given a lethal injection instead. At this moment, Canada’s federal government is consulting on how to further extend its assisted dying laws since they were introduced in 2017. Following a court ruling last year, the law will be extended to individuals who are suffering but who are not expected to die imminently which will include disabled people. The mentally ill and mature minors are now also being considered as candidates for assisted death. It has also been proposed that people who are likely to end up mentally incapacitated, due to conditions such as dementia, will be able to make advance requests for euthanasia.

Campaigners for assisted suicide try to reassure politicians such as myself that UK assisted dying laws will contain strict safeguards. But Canada’s example clearly illuminates that once we have changed the law in an attempt to alleviate one category of suffering it is hard to justify not extending the law, to alleviate ever more forms of suffering. In Canada, one of the safeguards, namely that death must be ‘reasonably foreseeable’ has already been struck down by the courts, even though assisted suicide and euthanasia were only made legal in Canada in 2016. That shows that no one, including legislators, can prevent the slippery slope.

Campaigners will also tell me that it’s possible to legalise assisted dying without permitting it for disabled people.  Lord Falconer of Thoroton hopes to introduce yet another assisted dying Bill in the next session.  He once launched his own commission on assisted dying and his report recommended,that assisted suicide should not be offered “at this point in time” to disabled people who were not also terminally ill. Should there be a vote in favour of introducing a ‘voluntary assisted dying Bill’ it will send a signal to the rest of the UK that this highly controversial, change in the law should be imitated. It will also communicate to the vast majority of disabled people who feel threatened and anxious about assisted dying regimes, that once again, politicians are just not listening. It will convey to burnt out, over-loaded doctors, who have dedicated their vocations to saving lives, that they will now be expected to facilitate this,  deliberately bringing about the deaths of their patients, while simultaneously being held responsible for ensuring that patients are not clinically depressed or acting under internal or external duress.

Finally, we know that laws are not simply ways of regulating and deterring certain behaviours. They are a means of communicating what a society stands for and values. I recognise there is compassion and good intentions on both sides in this debate but I sincerely hope that like, Westminster and Guernsey, the Isle of Man will send the resounding message that we don’t facilitate the suicide of anyone, regardless of their mental or physical health. Surely, that is the mark of a civilised and progressive society.

Thank you for your time