Dominic first became interested in Life when one of our Life Matters® Officers came to his school. James, our Life Matters® Officer for Life Link One, came to Dominic’s school to deliver one of our talks. Dominic was so taken with James’ message that he wanted to do more. Like many of us, once he knew the truth, he knew he had to do something about his prolife convictions.

Currently in Year 12, Dominic decided he would do some fundraising to support the work we are doing. In the last three months of 2018, we served 146 clients in Life Link One and spoke to 3668 pupils and students about the value of all lives. Given the ever-growing number of clients we are supporting, we were pleased to help Dominic with his fundraising efforts. He launched a Justgiving page to gain sponsors for his 10k run in Leamington Spa in April.

Taking a turn for the worse

When Dominic started asking for sponsorship for his 10k run, things started to get difficult. In school, he put up a sponsorship form which allows people to pledge support and gives a brief idea of some of the services Life provides. One day, Dominic came to school to find that this had been done: 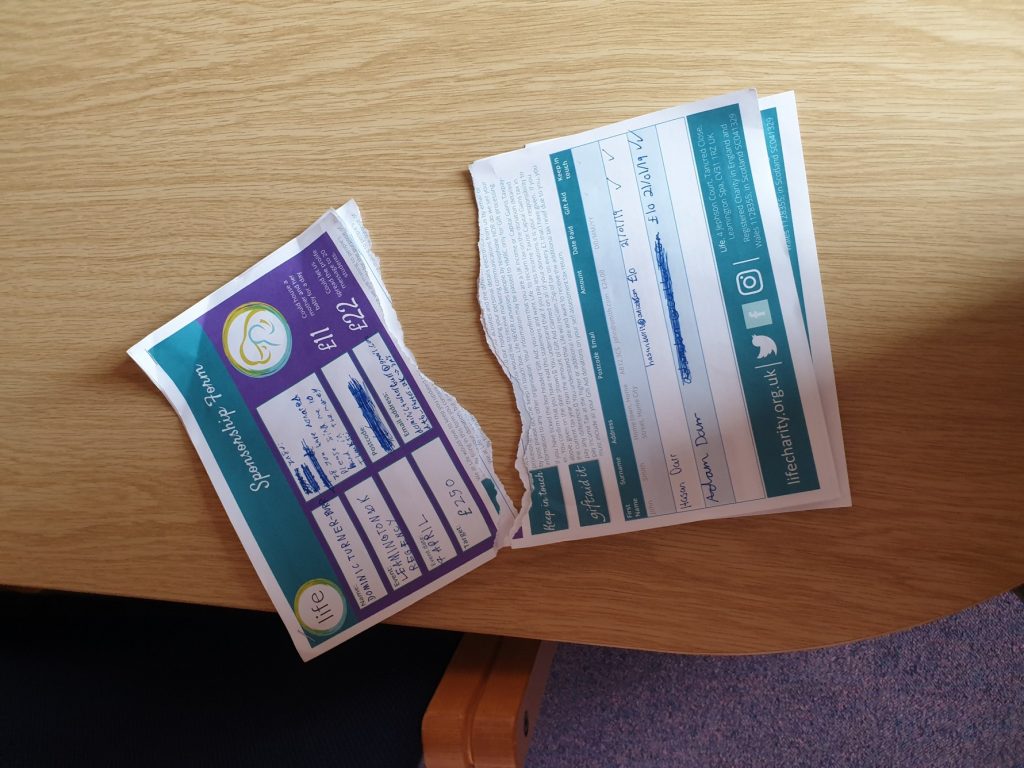 Undeterred, Dominic taped the form back together and put it back on the noticeboard. When he returned the next day however, the form had been thrown away! Not only this, but in the place of the sponsorship form, Dominic found the following note: 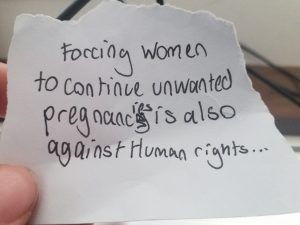 Note left by student in place of sponsorship form

A silver lining to every cloud

While the school are dealing with the situation appropriately, it remains the case that Dominic has been unfairly treated for his prolife beliefs. Of course, at Life we are no strangers to this treatment and intimidation. Speaking to those we know about prolife issues can be even harder than speaking to strangers. As Dumbledore says, “There are all kinds of courage. It takes a great deal of bravery […] to stand up to our friends.”

We want to commend Dominic for his courage in speaking out for Life’s mission of creating a just society with the utmost respect for all human life from fertilisation. Like us, he believes that opposition to abortion must go hand in hand with the provision of alternatives.

There is a silver lining to all this. The publicity brought attention to Dominic’s fundraising efforts and more people are coming forward to support him. His original fundraising target was £250 but, with his online and offline donations, he has already smashed this goal with 2 months still to go before the race!

In an email to us, Dominic said

“This experience has further spurred me to keep on fighting for your most noble cause.”

Thank you, Dominic for your commitment to Life! If you want to show Dominic your support, leave a comment below or sponsor him today.