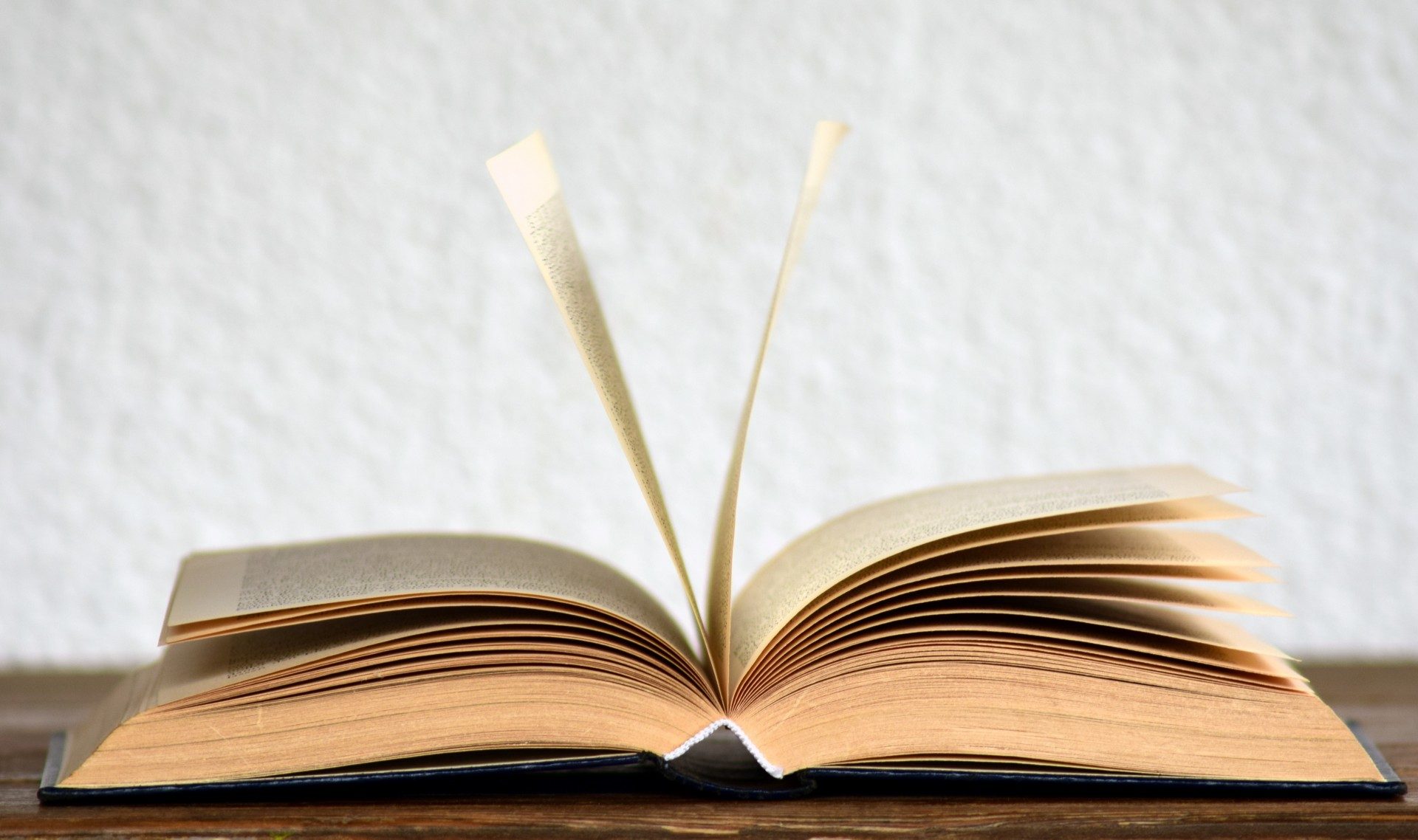 Responding to an article of mine earlier this year, a commenter asked why I used the term ‘prochoice.’ Although I answered their question in the comments section, it got me thinking about what ‘prochoice’ even means.

It seems simple enough. ‘Prochoice’ means that someone supports legal abortion access – they believe that a woman has the right to choose abortion.

However, consider these examples:

All of them are ‘prochoice’ in that they support legal abortion access, but it’s clear that they believe slightly different things about abortion.

‘Prochoice’ is a vague term

The issue is that ‘prochoice’ is a vague term that means different things for different people. As a result, the term hides a lot of important details and distinctions. I’ve spoken to 20,000+ pupils about the prolife message in my time at Life and when someone says to me, “I’m prochoice,” it tells me very little about what they actually believe when it comes to:

Even worse, it tells me very little about why they believe these things, or about their life experiences that have shaped their views – even though it is generally helpful to use terms that people identify themselves with.

So here’s a smart tip. Next time you’re in a discussion with someone who says, “I’m prochoice,” try to not assume what they mean by this.

Instead, why not say something like this. “Thanks for sharing a bit about what you believe. I’d really like to understand your point of view fully. When you say you are prochoice, what do you mean by that? What do you think the abortion time limit should be, and under what circumstances should abortion be available or not available?” You might be surprised at the answer you get. (Let us know what happens in the comment section below!)

‘Prochoice’ is a ‘capture-all’ term

Take a look at this shot from our Life Before Birth leaflet. It’s one we often give out at Freshers’ Fairs and on Roadshows. It has details of Life’s Pregnancy Matters™ service and, as you can see, an outline of the unborn child’s development from fertilisation to birth. It also shows us why it’s bad that ‘prochoice’ is capture-all term.

Imagine someone drawing a line on this timeline about what the abortion time limit should be. Let’s say they draw the line at fertilisation and that the human embryo has a right to life. This person might call themselves ‘prolife’ and society would probably label them as ‘prolife’ – or another term like ‘anti-abortion.’

However, let’s say someone else draws the line at 3 weeks – when the heart starts to beat.

Or 6 weeks, when doctors can detect primitive brainwaves.

Or 12 weeks, when the baby responds to touch.

Or 16 weeks, when the mother may feel the baby move for the first time.

For any of these, the person might consider themselves ‘prochoice.’ They may assert that women have the right to an abortion and might even ally themselves with the abortion-rights movement. And they’re likely to be labelled as ‘prochoice’ instead of prolife … even though the abortion time limit they want is more restrictive of abortion than our current UK laws. Right now, the UK allows abortion up to 24 weeks for healthy babies, and up to birth for disabled children.

In other words, the abortion-rights movement uses the ‘prochoice’ label and has managed to create a term that most  can agree to – even if they are just apathetic about the abortion issue. On the other hand, people often use ‘prolife’ in a far more exclusive way.

A spectrum of beliefs about abortion

Using the term ‘prochoice’ also conceals the fact that the vast majority of people in the UK want restrictions on abortion. In other words, they aren’t ‘prochoice’ – at least, not fully.

According to a Comres poll released in 2017, among the British public:

This is important, so I’ll say it again. The vast majority of people in the UK want some kind of restrictions on a woman’s right to choose an abortion.

One of the most common attacks on the prolife position is, “Why don’t you want women to be able to choose what happens to their body?” But 99% of UK people want some restriction on what a woman can choose when it comes to abortion. In that specific and narrow sense, the prolife movement has common ground with 99% of the UK public. Most people’s views on abortion are a mix of ‘prochoice’ and ‘prolife’, but this mix gets subsumed under the label of ‘prochoice.’

Most people's views on abortion are a mix of #prochoice and #prolife, but this mix gets subsumed under the label of prochoice. Click To Tweet

Using the term ‘prochoice’ conceals that the disagreement on abortion is not about whether a woman’s right to choose should be restricted. Most people agree that it should, to a greater or lesser extent. The disagreement is over where to draw the line. What, exactly, ought those restrictions to be?

I’ve observed that many people will describe themselves as ‘prochoice’ and will be very adamant that they don’t support abortion. They will draw a distinction between supporting abortion itself and supporting the right to choose abortion. They’ll say, “I’m prochoice, not proabortion.”

Think about the following arguments:

We know that drunk driving, robbery, and arson are all wrong. If you support a person’s right to choose to drunk-drive, rob, or commit arson, then you are supporting those immoral actions.

I’ve met a number of people who are prochoice but who acknowledge that one of the choices in an unplanned pregnancy is to give birth to the baby. Here’s a screenshot from a Twitter user responding to Life being wrongly evicted from the Lambeth Country Show: 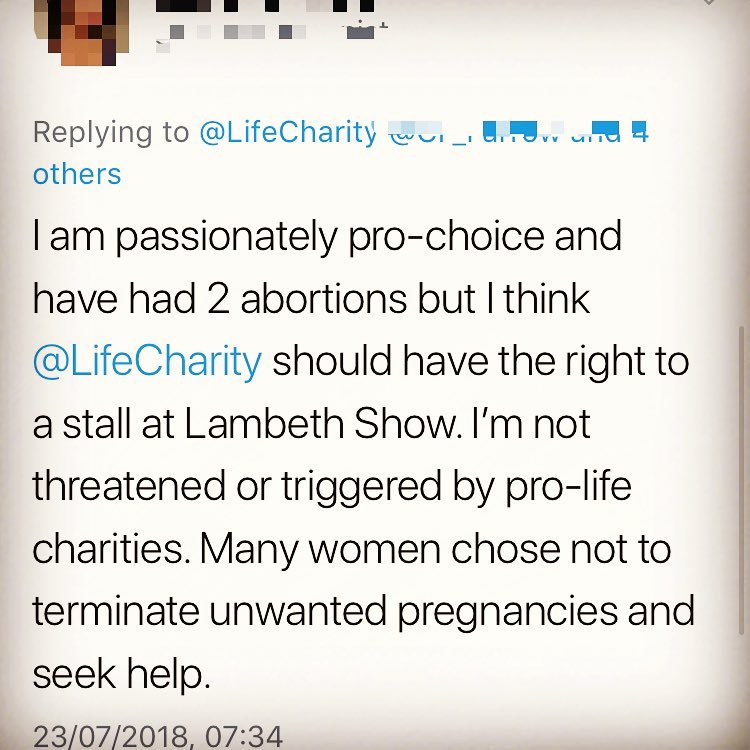 Sadly, many abortion-movement leaders don’t have the same attitude.

Consider when Life received £250,000 from the UK government via the so-called “Tampon Tax.” Life received this money to give a roof over the head and vital life-skills training to young mums as part of our Pregnancy Matters™ service in Life Link Three. The abortion lobby then went on a sustained campaign to discredit Life and take this money away from the women who needed our support.

‘Prochoice’ is a dishonest term if you only offer abortion and try to discredit those who provide positive alternatives to abortion. Life helps 70 women every day; we are very transparent in our Terms of Service that we are a prolife organisation and do not refer for abortions. The women are coming to us because they want our help. If you call yourself ‘prochoice’ but can’t bring yourself to celebrate practical support given to women in difficult pregnancies, then can you really call yourself ‘prochoice’? Or do you just mean that you support the choice of abortion?

The choice to do what?

Using the term ‘prochoice’ also doesn’t tell you what the choice is that’s being chosen. In this case, the choice is abortion. The ‘prochoice’ term therefore takes the argument away from whether abortion is right or not and instead frames the issue as one of ‘choice.’

The reason people don’t say, “I’m not pro-drunk-driving, I’m just pro the choice to drink and drive” is because we all know that drunk driving is morally wrong. Not only can you kill yourself, you can kill other people. So there’s never any question whether you should have the right to choose to drunk drive or not. If you said that you were ‘prochoice’ when it came to drunk driving, that would mean that you were convinced at some level that drunk driving is morally good enough that it should be a legal option for law-abiding citizens.

Basically, you’d be saying that I’m a bad person.

And that’s why I feel that the ‘prochoice’ label is actually unhelpful for most prochoice people to use. I’m assuming that most prochoice people are acting in good faith when they describe themselves as ‘prochoice’. But they’re being unfair to prolife people by using language that assumes that abortion is okay – productive conversations don’t sneak in assumptions like that. Productive conversations get all the assumptions out on the table so they can be discussed.

The real question in the abortion debate is whether abortion is okay. We should stay focused on that question, instead of painting prolife people as ‘anti-choice.’

What abortion really is

And when we ask whether abortion is okay, we find the surprising answer that many ‘prochoice’ philosophers agree with prolife philosophers that abortion is the act of killing an innocent human child.

You might have heard the argument that, “Prolife people aren’t really prolife – they are just probirth.” The idea is that they don’t really care about the woman or her child once they are born. At Life, of course, our Pregnancy Matters™ service helps women after they give birth with free mum and baby supplies, money, a place to stay, or a shoulder to cry on. So it doesn’t really make sense to imply we don’t care about the mum or baby after the baby is born.

But it also doesn’t make sense to say that prolife people are just ‘probirth.’ Once a woman has conceived, her unborn child will at some stage pass out of her body and be ‘born.’ The question is under what circumstances the child is born. And, in the case of an abortion, they are born with their life ended by a doctor.

That’s the ‘choice’ to which ‘prochoice’ refers.

Prochoice people could be future prolifers if given the truth

Have you read the story of Abby Johnson? She was an abortion clinic director – and 2008 regional Employee of the Year – for Planned Parenthood, the US organisation that aborts 330,000 American children every year. She was “prochoice.”

But, in late 2009, she was called to help in an abortion. Stunned by what she saw, Abby realised that abortion is wrong. She ran for help to Coalition for Life, a local prolife organisation, who helped her to leave the abortion industry. She is now a prolife warrior who runs And Then There Were None, an organisation which has helped more than 300 abortion workers leave the industry. Abby tells her story in her book UnPlanned, which is now also a major motion picture.

Conclusion: A call to love

‘Prochoice’ is a vague term that conceals a lot of different beliefs about abortion. It:

But Abby’s story tells us something. Let’s not forget that some of the greatest prolife advocates are those who were strongly ‘prochoice’. This isn’t just some anecdotal idea; one fascinating sociological study found that one out of every four people active in the prolife movement were prochoice when they started getting involved in the prolife movement!

People often use ‘prochoice’ in opposition to ‘prolife.’ Abortion is either right or wrong; it can’t be both. But let those of us who believe abortion is wrong always be compassionate, forgiving, and gracious to those who identify as ‘prochoice.’ If the prolife movement is to win, it must win the hearts and minds of those who support abortion. And, if they are anything like Abby, they will need our love as they recognise the tragic reality of what abortion is – and why they must help us to end it.

2 people are talking about What does it mean to be ‘prochoice’?