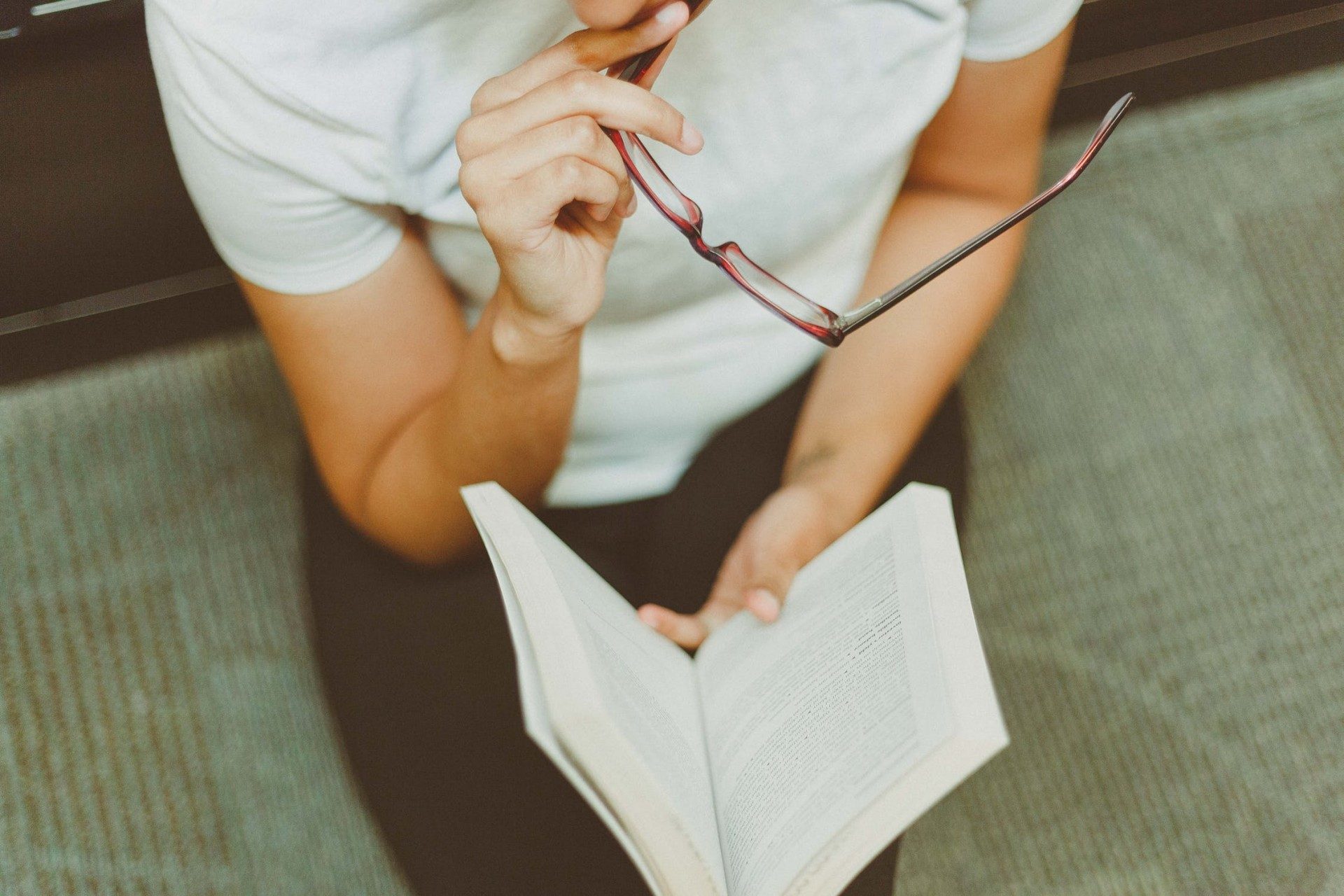 Some prochoice people – though not all – will say things like:

We know that the unborn are:

In other words, they are a human being. 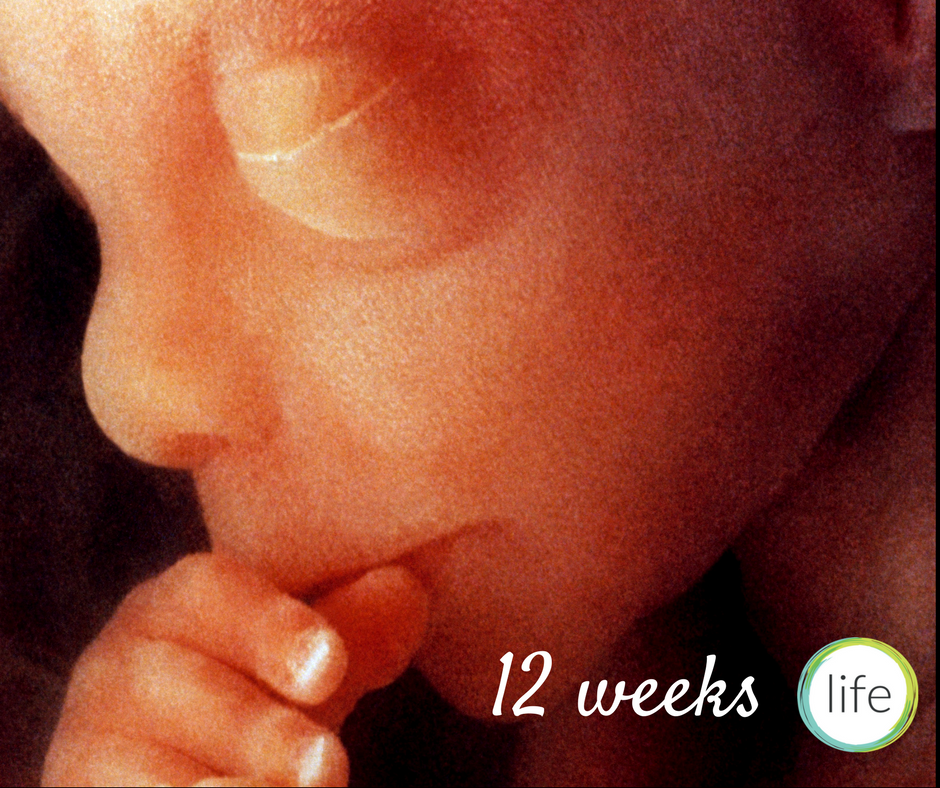 This is the same for you reading this right now – you are alive, human, and a complete and distinct human organism. You are a human being!

This acknowledgement is usually put in brief as “life begins at conception“. However, because it’s a shorthand phrase, it’s not the most accurate phrase. In a school, for example, one astute student pointed out to me that the sperm and the egg are alive before the moment of fertilisation, so it’s technically wrong to say that life begins at conception.

The student was absolutely right. However, what prolife people mean when they say “life begins at conception” is more accurately put as “the life of a new, distinct, whole, and complete human organism – a biological human being – begins once the process of fertilisation – sperm-egg fusion – has completed.”

Where prolife and prochoice people agree

While many prochoice people argue that a new, distinct, whole, and complete human organism does not begin its existence at fertilisation, leading prochoice philosophers do not generally make this argument. They know that the scientific evidence is huge, objective, and convincing that the unborn are human beings.

In fact, one of my hardest jobs in schools is to help people realise that prolife people and prochoice philosophers actually agree that a new biological human being comes into existence after the process of fertilisation has completed. Check out this quote by noted prochoice philosopher Peter Singer, who has also argued that infanticide is moral. 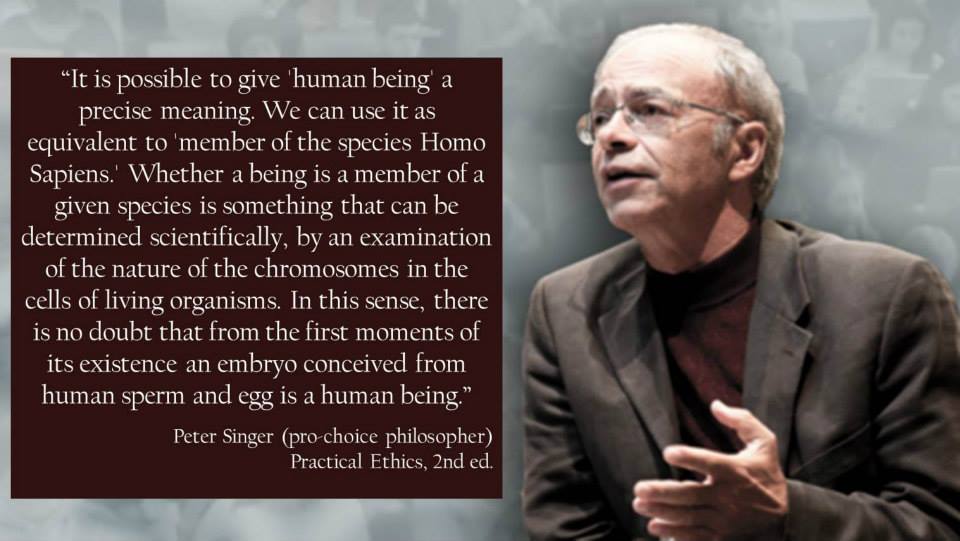 Let’s take another example: prochoice philosopher David Boonin. In his book A Defense of Abortion, published in 2002, he makes this startling admission:

On the desk in my office where most of this book was written and revised, there are several pictures of my son, Eli. In one, he is gleefully dancing on the sand along the Gulf of Mexico, the cool ocean breeze wreaking havoc with his wispy hair … In the top drawer of my desk, I keep another picture of Eli. The picture was taken September 7, 1993, 24 weeks before he was born. The sonogram image is murky, but it reveals clearly enough a small head tilted back slightly, and an arm raised up and bent, with the hand pointing back toward the face and the thumb extended toward the mouth. There is no doubt in my mind that this picture, too, shows the same little boy at a very early stage in his physical development. And there is no question that the position I defend in this book entails that it would have been morally permissible to end his life at this point. (pp. xiii, xiv)

Take a moment to re-read the quote. Listen to what he is saying.

Let that sink in.

Ann Furedi is a British abortion advocate currently leading a campaign to legalise abortion in the UK up to the moment of the baby’s birth. Here is what she says about the unborn:

We couldn’t allow abortion if we accepted that fetal life had the same degree of value as born human life, and I don’t believe that it does … We can accept that the embryo is a living thing in the fact that it has a beating heart, that it has its own genetic system within it. It’s clearly human in the sense that it’s not a gerbil, and we can recognize that it is human life … The point is not when does human life begin, but when does it really begin to matter? 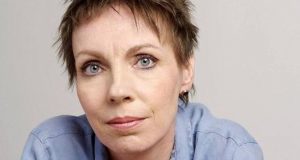 Again, let that sink in.

Everything she just argued is what a prolife person would argue. The unborn are distinct, living, whole human organisms – human beings. But then she argues that is is acceptable to destroy those human beings, because they don’t yet “matter.”

The issue: not life, but the right to life

Boonin, Singer, and Furedi argue that the unborn are human beings – just as prolife people do.

The prochoice assumption: you can separate human beings from their right to life

“Life unworthy of life” – or, in German, Lebensunwertes Leben – was first used in a book appearing in Germany in the 1920s. This book advocated euthanasia for the “physically and mentally defective”. This concept formed a core part of the National Socialist Worker’s Party (Nazi) ideology and was a driving force behind their systematic destruction of millions of Jews, gypsies, disabled people, religious minorities, alcoholics, pacifists, the mentally ill, and anyone else they deemed ‘unfit’ or unworthy of life, during the Second World War.

To be very clear: I am not saying that prochoice people or prochoice philosophers are Nazis. I am not saying that Singer, Boonin, and Furedi are Nazis, have Nazi sympathies, or are in any way associated with fascist groups. However, I am saying that they have reached the same conclusion as those who perpetuated terrible human-rights atrocities – that some human beings do not have a right to life. Singer, Boonin, and Furedi are, of course, convinced that they are right, and I am sure they would say that Nazi crimes were unjustified and evil. Yet, out of compassion, I must point out the similarity in their thinking so they can see what extreme and dangerous ground they have placed themselves in, and which they are advocating every day.

The assumption that some human beings do not have a right to life is key to the prochoice movement. It is foundational. It’s not the only foundational assumption to the prochoice movement, but it is one of them. It is one reason why they call themselves the “prochoice” movement – they think that the unborn human being does not have a right to life, and therefore it is up to individual mothers to make the choice to destroy or safeguard that precious life growing inside them.

This is chilling. The first duty of any society is to protect the right to life of all human beings.

At Life, our guiding principle is that it is not enough to disagree with abortion and its philosophy; loving, positive alternatives must be provided. Society has, for 50 years, skirted its responsibility to protect the right to life and to assist those in crisis pregnancies to choose life for their babies. Therefore, Life will do this. We accept the responsibility to take effective action to save lives – babies, mothers, and fathers – from abortion.

As our co-founder, Professor Jack Scarisbrick MBE, said, “We are simply living out the principle that all human life should be equal before the law.”

It is for this reason that the “prolife” movement might be better termed “the right-to-life movement“. Again, it’s a shorthand. What it means is that we are a movement that seeks to live out the principle that all biological human beings have an intrinsic right to life. We focus on abortion because it is such a severe and widespread injustice against that right to life.

All biological human beings have an intrinsic right to life, and women should be supported to make choices that respect their own and their child’s intrinsic right to life: this is the principle that undergirds our mission. It is ethical, just, acknowledges scientific evidence, and compassionate. It is the better way. The Life way. 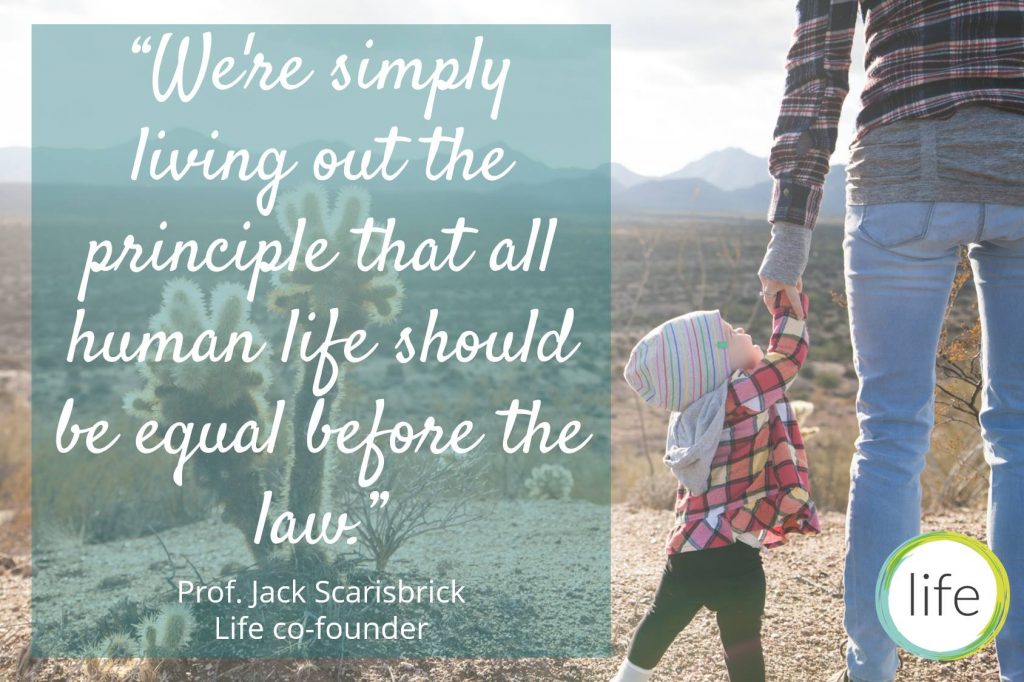 2 people are talking about Where prolife and prochoice philosophers agree