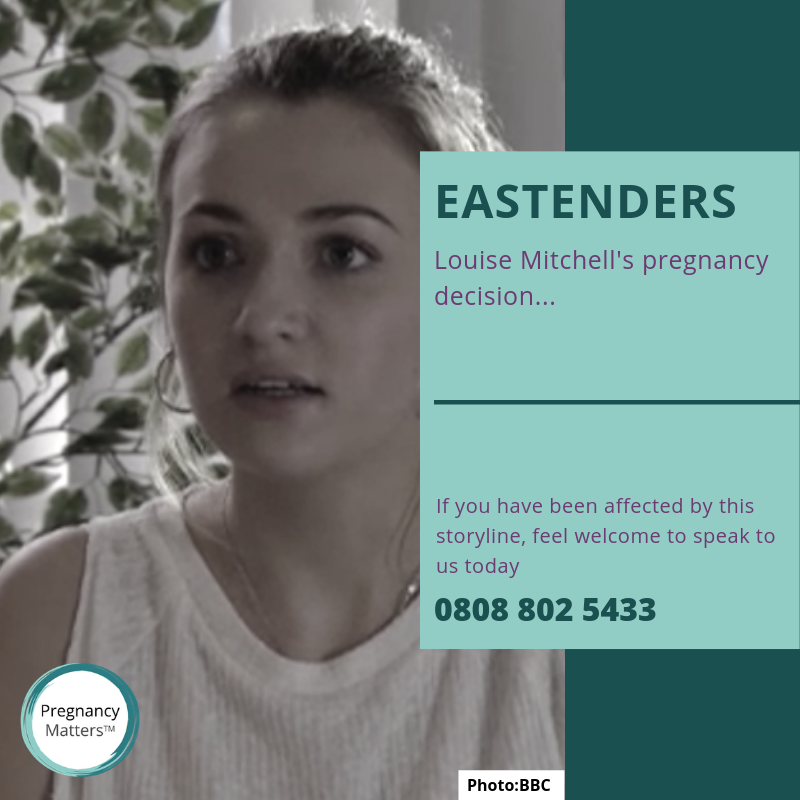 Pregnancy Matters™ client Dani* reveals her critical reaction to the Eastenders storyline in this in-depth interview.

What did you think of the Eastenders storyline?

It is hard hitting though it has been very rushed in scenes and at times it’s slightly confusing. I’ll explain the Eastenders storyline and how teenage mum-to-be Louise has become more and more trapped. Sharon, Louise’s step-mum, has supported her decision to end the pregnancy. It has gone on to focus more on the private access of termination. However, this wasn’t made clear for the two days of scenes prior to Louise’s appointment. Sharon said she was respecting her wishes yet didn’t explore every option available to her because of Sharon’s own relationship with Keanu, the father.

Louise is very trapped because Sharon coerced her into having a termination. She did this out of selfishness and by not saying she would have supported Louise in keeping her baby. As a result, Louise has now led Sharon to believe she had the termination. Currently, both Sharon and Keanu are left in the dark. Louise is portraying signs of wanting to keep baby after seeing how big the baby is on a developmental site.

Did it reflect your personal experience of finding out you were pregnant?

It did yes. At the start, Louise was focusing on reasons to have a termination. These reasons were mainly  how other people were supporting or not supporting the decision out of their own selfishness.

It was not until later on in the clinic when it became important for her to make the choice for herself. She realised that her earlier decision to terminate was due to guilt and not finding the correct support. Unfortunately, Louise is still very alone.

What should Eastenders have included but didn’t?

Sharon called the clinic and got an appointment within ‘a few days’, however there was no mention of it being private care until last minute. I found this difficult because not everyone has the finances to do this. It may even lead people to believe the NHS would do the procedure as quickly. Also, when they were at the clinic, they played it out too simply by saying, “we will ask a few questions, then you are given the first tablet then you can’t change your mind”.

But it isn’t as simple as that.

Many women are scared, anxious, unsure, confused, upset and often do not have access to the correct support. Even if they do have support, emotions linger for months and years after. You remember the day you found out, the due date, flashbacks, asking yourself again, was it the right decision? There was nothing about the counselling session that happens before or after. Nothing about how you have to give a reason for the termination. Sharon simply said “Just a few more days and it will all be over”.

There was nothing about the way it can affect relationships, mental health, recovery or moving forward with life after the termination. It has been so played down even though it would have been a good chance to provide better education.

What would your message be to those who are watching and perhaps experiencing an unplanned pregnancy?

That it doesn’t happen that quickly nor as easily. Your world has been tipped upside down. You have responsibility in whatever decision you choose: parenting, adoption or termination. At one point, Sharon mentioned ‘other options’ (meaning adoption) but not a single mention of how she could support Louise in keeping the baby. It isn’t just ‘turn up 2 days after you have found out you are pregnant, take a pill and that is it’ as this storyline would have you believe. Private terminations can be still require a week or so wait and is costly. The NHS doesn’t just provide it within days either. Furthermore, there are more than just a few ‘simple questions’ to answer.

It is important to make the choice for yourself , look at the situation around you and see what support you can receive.

If you have been affected by this Eastenders’ storyline and would like to talk to someone, feel welcome to contact us via one of our help-line channels.

Dani* is a pseudonym to protect our client’s privacy. You can read more from her over on our Instagram page, look out for Dani’s Diary.