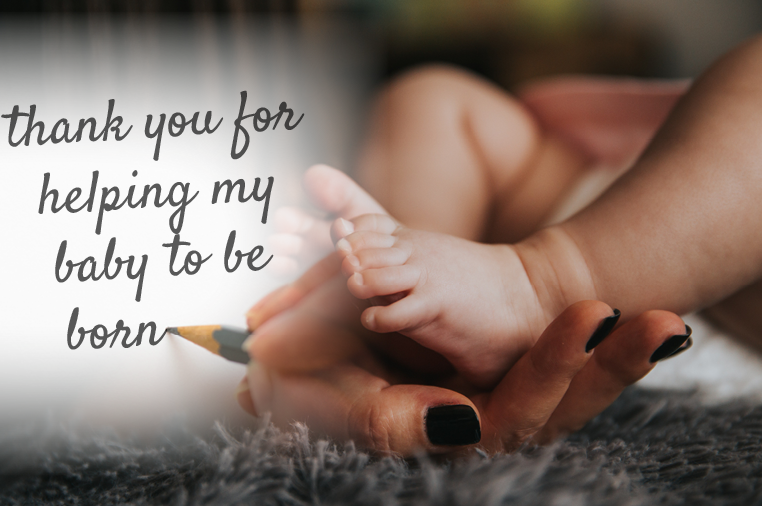 Esther was 17 weeks pregnant when she first contacted Life's Pregnancy Matters™ Helpline. This is her adoption story.

When Esther rang the helpline at 17 weeks pregnant, she explained that although she was still with the father, neither of them wanted to have a baby. But because she had only just found out that she was pregnant, she could not see herself having an abortion.

“I know these little flutters I can feel now in my stomach are the baby moving, and as much as I don’t want to be a parent I don’t think I could go through a termination after reading about what to expect.”

Esther didn’t want to discuss any other option around the pregnancy other than adoption. So that is exactly what was discussed.

“I live on one of the islands close to Jersey and really cannot stay here, I need to get away before anyone finds out I am pregnant.”

“I am training to be a nurse at the moment so I could easily say that I have to do some courses on the mainland. My partner will support me with explaining this to my family and friends.”

Over the next two weeks, arrangements were made by both Esther and Pregnancy Matters™ to ensure a space in one of the houses was available and that Esther was still sure that this was the way she wanted to go.

A member of the Pregnancy Matters™ team met Esther at the airport and took her to the house. On the way to the house Esther started crying:

“I think everything’s just hit me, realisation that I am going to be away from all the people that love me, but I know that I am doing the right thing for me.”

“Although I have chosen to do this and I know it is right for me and my partner, it has been more emotional and soul searching than I thought possible. I would not have got through this and come out the other end without all the support that Pregnancy Matters™ have given me. I have never felt judged or treated any differently to any of the other “moms to be” in the house , who want to keep and stay with their babies. Thank you for holding my hand.”

When Esther came to stay at the house it was a new experience for me.  I had never supported a lady before who was choosing adoption so I was unsure of the support she would need and how the experience would play out.  At first I was anxious about how Esther would fit in at the house as there were a number of young mums sharing the property with young babies and I thought this may be difficult for Esther.

It worked out better than I thought. Esther got along well with the other mums and fit in well at the house.  Esther engaged well with staff and would spend time in the office chatting with me about her situation and life in general.  She took part in weekly cooking sessions with our volunteer and the other tenants and enjoyed baking in her spare time.

Esther was very anxious as she had no idea how to start the adoption process. We contacted the local adoption services and they visited Esther to begin the process.  They guided Esther through the whole process and were very supportive.

Following the adoption, Esther came back to the house and received lots of support to help her complete paperwork and write letters to be passed on to the adoptive family.

A few weeks later it was time for Esther to leave the house and return to her family. Esther commented that the support we had given her had made the process much easier for her and thanked us for helping her through one of the hardest times of her life.

I, along with one of my colleagues, met Esther at the airport. The flight had not been great for Esther, she had been sick and felt a little woozy. We went and got some water while she settled a little before the drive back to the Life House.

On the drive back we passed a scenic spot and she asked if we could stop because she was not feeling well again. When we pulled over she burst into tears. The reality of being far from everyone had suddenly hit her. By the time we reached the house, all she wanted to do was sleep. I arranged to check in with her the next day.

The following day, Esther and I looked at setting up some listening sessions around how we would walk through the coming weeks. Over the weeks that followed we worked through a rollercoaster of emotions. We looked at how she would keep her feelings safe when talking to family and friends back home, how she felt during the development of the pregnancy, what each meeting with the adoption team had felt like and coping strategies for when she was feeling low.

Halfway through the time in our House, Esther’s partner came over to visit. While they were in contact every day, her excitement at seeing him was immense. The session we had prior to his arrival was very sensitive for her. She was very conscious of how her body had “changed” during the pregnancy. After his weekend visit Esther was particularly low – in one of our next sessions she showed me a countdown calendar she had made.

As the date of the birth grew closer she became more reluctant to look at the nearing situation of what was happening for her. She turned down a meeting with her adoption social worker, when we explored why, she said because it was to give her an opportunity to “change her mind” and there was no point in that because she wasn’t going to.

I can remember that evening arranging to speak to my supervisor because I had just been hit with a realisation myself. Deep down I think I had envisaged Esther recognising the baby she was going to have and a “happy ever after” ending, but the fierceness with which she had made the statement had affirmed her complete choice.

The day Esther had her baby I went to visit her at her request, something I never would do normally, but given the journey we had been through together, it needed it to happen. She had requested that the baby be taken at birth. This is exactly what had happened.

She was very emotional and could not hide it, in fact we both cried. She told me she and her partner had written a letter for the baby, which she had given to the social worker – it explained all the reasons why this journey had to happen.

The day Esther left she called me to say goodbye and that she had left a letter at the house for me… it was one of the most moving letters I have ever read, she said:

“thank you for helping my baby to be born”.

Send me a pregnancy test

You do not have permission to view this form.

One person is talking about Esther’s adoption story